In childhood B-ALL the t(12;21)(p13;q22) chromosomal translocation represents the most frequent rearrangement with an incidence of up to 25% in pediatric patients. The chromosomal translocation results in the ETV6/RUNX1 fusion gene, which is assumed as the “first hit” in ETV6/RUNX1 positive B-ALL, but additional genetic alterations are required for the manifestation of the leukemia. Our goal is to identify secondary hits by developing mouse models for this fatal disease.

We generated B cell specific transgenic mice for ETV6/RUNX1 and by using those we found a potential new mechanism how additional mutations could be acquired in an ETV6/RUNX1 positive pre-leukemic clone: Expression of ETV6/RUNX1 leads to increased reactive oxygen species and the subsequent accumulation of DNA double strand breaks, a prerequisite for mutagenesis, suggesting that the expression of ETV6/RUNX1 triggers mutagenesis through enhanced reactive oxygen species production (Kantner, H.P. et al., Neoplasia, 2013).

To investigate candidate second hit genes for ETV6/RUNX1+ leukemia development we have combined ETV6/RUNX1 with exogenous expression of the antiapoptotic protein BCL2, as deregulated expression of BCL2 family members plays a critical role in leukemia development. We therefore intercrossed our B cell specific ETV6/RUNX1 transgenic animals with Vav-BCL2 transgenic mice. We found that double transgenic mice developed glomerulonephritis and B cell lymphoma, with severely aggravated phenotypes, resulting in a significantly shorter life span as compared to single transgenic controls or wild type mice. ETV6/RUNX1-BCL2 double transgenic animals displayed higher immunoglobulin titers and enhanced deposition of immunoglobulins in the kidney, resulting in autoimmune glomerulonephritis. Thus, we could demonstrate a previously unrecognized synergism between ETV6/RUNX1 and BCL2 impacting on the development of malignant disease and autoimmunity.

This project is done in collaboration with Dr. Renate Panzer at the Children´s Cancer Research Institute. 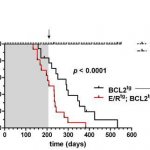 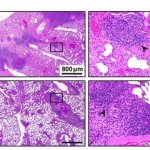 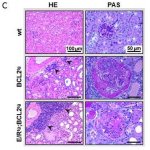 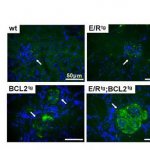 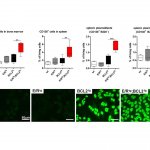