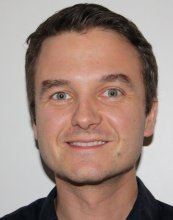 Florian Grebien of the Ludwig Boltzmann Institute for Cancer Research (LBI-CR) will receive a coveted Starting Grants of the European Research Council (ERC). It is the first ERC Grant, for a researcher at the Ludwig Boltzmann Gesellschaft. With the aid of EUR 1.5 million funding Grebien will expand its research group, which he founded in January 2014 with the support of the Institute. He explores how blood cancer develops and progresses with a specially developed technology platform. Using an innovative combination of modern methods he wants to identify key molecules that can be used as a basis for the development of new therapies. The reviewers of the proposal confirmed now in their evaluation statement, that the approach is clinically very important and leads to the development of a novel concept.

Pathological processes that underlie the development of cancer, are the focus of research of Florian Grebien and his team. They combine new cell systems with modern systematic approaches to achieve a comprehensive characterization of cancer-causing mutations. Florian Grebien: "Through functional studies we want to screen all human genes to identify a limited number of candidates that lead us to hitherto unknown molecular vulnerabilities in a cancer cell." The results will be validated in mouse models and patient material to determine whether it is possible to develop new drugs based on these findings. This is a particular strength of the LBI-CR, which has established itself as a center of excellence for Comparative Cancer Research.

Functional validation of genetic data as a bottleneck of modern biology
New genetic studies provide a faster growing number of mutations that can lead to cancer. A thorough experimental validation of these changes with current methods cannot keep up with the production of genomic data which is constantly accelerated by methodological advances. Therefore, the development of novel tools for functional analysis of these results is currently one of the great scientific challenges. Florian Grebien has developed with his collaborators a discovery pipeline to close this gap. "Coping with the amount of data that modern genetic methods are producing is even with modern computer programs barely possible. This is why I think it is important that we biologists develop strategies that can validate these data at least to some extent in a biological system. Of course I feel greatly honored that the ERC agrees and enables me with the ERC starting grant to implement my research at the highest level."

Trust in outstanding young researchers pays off
For young scientists, the transition towards an independent research position as head of a team constitutes a big hurdle. In many national research systems this large step is difficult to master, not only because appropriate funding programs are lacking but also positions with the potential for scientific development are scarce. The ERC Starting Grants are intended to limit the brain drain of young scientific European talent. But young researchers need ideally an institution which places trust in them and provides the opportunity to develop their own research programs. This is where the Ludwig Boltzmann Gesellschaft (LBG) tries to step in and provide opportunities. Ludwig Boltzmann Institutes are devised as incubators for new initiatives of young researchers, which should establish themselves in the Austrian scientific landscape in case of success. Claudia Lingner, director of the Ludwig Boltzmann Gesellschaft: "We are very proud of our first ERC Grant at the Ludwig Boltzmann Gesellschaft and congratulate Florian Grebien to this success. The Ludwig Boltzmann Institute for Cancer Research is an outstanding example of how successful our strategy of research incubators can be and how trust in young researchers and promoting their development pays off. We see this award as a strong encouragement to continue on our way. Our current bid, which was initiated on November 17, we want to start new promising Ludwig Boltzmann Institutes. "Applications for the creation of new LBI may be submitted until 20 January 2015 (www.lbg.ac.at/ausschreibung).

ERC backs 328 early-career top researchers with €485 million
This call attracted 3,273 applications and the overall success rate rose to around 10%. In this call, grants are awarded to researchers of 38 nationalities with an average age of 35 years, hosted in 180 different institutions throughout Europe. From Austria eleven applicants at eight different research institutions were successful, five of these in the life-sciences. ERC President Prof. Jean-Pierre Bourguignon commented: "The ERC is serious about young talent; with two thirds of the overall ERC budget invested in bright young minds, they are empowered early in their careers and given the scientific freedom to pursue their most creative ideas. This helps much talent stay in Europe and sparks breakthroughs that benefit all. For the future, it is key that they be given appropriate career prospects."

About the LBI-CR
The LBI-CR was founded in 2005 as a research incubator and received earlier this year, three endowed chairs and its scientific excellence was thus firmly embedded in the Austrian research system. In order to continue doing research with a critical mass, the LBI-CR decided to found a new research group and to promote a young research talent. Florian Grebien was recruited to give him the opportunity to lead his outstanding research independently. Richard Moriggl, director of the LBI-CR: "Florian Grebien is an important addition to our Institute, who has introduced new technologies and tackles innovative, critical questions in cooperation with the other teams. We have invested in a young research group and had to overcome personal interests of established groups to make this possible. I acknowledge the LBG, who has supported us here with a performance-based funding. Therefore I am pleased even more that Dr. Grebien succeeded in this strong competition and the international evaluation of the European Research Council returned a positive review. We are confident that our cancer research will be strengthened and bear fruit in the coming years. "

Press Release by the ERC

Statistics of the ERC Call for STARTING Grants 2014