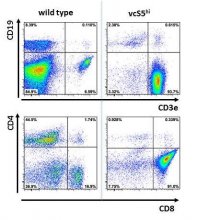 We are studying normal and abnormal hematopoiesis. We and others have described an essential role for STAT5 activation (for overview see Moriggl & Ferbeyre, BBA, 2011) in the regulation of survival genes in myeloid leukemias with a link to PI3K-AKT-mTOR activation. We were the first to link serine phosphorylation and oligomerization of STAT5 to myeloid transformation. We have related the findings to human MPN and our current work is dissecting how pYSTAT5 synergizes with loss of PTEN. 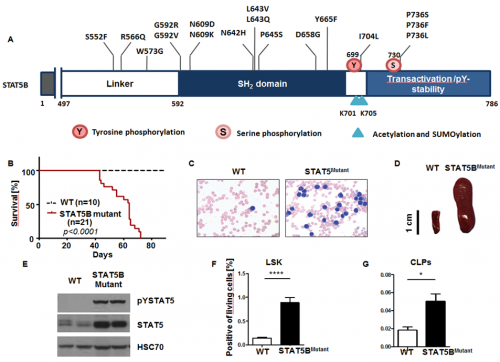 The Recurrent STAT5B Driver Mutation Causes Rapid Lymphoma/Leukemia in Juvenile Mice: A Schematic of STAT5B together with reported recurrent, somatic mutations. B Kaplan–Meier survival curve of mice which harbor the STAT5B mutation shows that the mice were terminally ill at the age of 60 days. C Peripheral blood smear of the mutant mice shows a severe degree of white blood cell expansion. D Mutant STAT5B transgenic mice suffer from splenomegaly with eight fold increase in spleen weight (data not shown). E STAT5 expression and activation was increased in LN of transgenic mice as analyzed by immunoblotting. F Further analysis revealed that the LSK population in the transgenic mice is significantly increased in comparison to WT mice. G Interestingly, the population of the common lymphoid progenitor cells is also increased.

The RM lab is further involved in therapeutic cancer intervention studies, also within the context of an SFB F47. These projects are conducted in close collaboration with Partners Medical and Veterinary Medicine universities, IMP and CCRI.

The research on hematopoietic cancer is financially supported by the Austrian Science Fund (FWF) through SFB-F28 and SFB-F47.

SFB F28 was completed after 10 succesful years in 2016 and was headed by Prof. Mathias Müller from the Vetmeduni Vienna with deputy speaker Prof. Thomas Decker from the Max Perutz Laboratories. SFB F47 is a grant with 10 PI´s. It can run for 8 years and it is headed by Prof. Peter Valent from the MUV with deputy speaker RM, LBI-CR. The projects focus on „JAK-STAT Signaling: From Basics to Disease“ and on “Myeloid Neoplasm”.