At the annual meeting of the Ludwig Boltzmann Institute for Cancer Research over 40 renowned scientists from Austria, Germany, USA and Switzerland gathered at the university center Obergurgl of the University of Innsbruck on April 16 - 17. They presented and discussed their current work in experimental cancer research. As a general consensus emerged that the interaction of tumor cells with their surrounding cells, the stroma warrants closer attention.
Tumors arise from genetically modified cells that are able to escape strict proliferation control and multiply unchecked. Mutations activating genes driving cancer, so called oncogenes. On the other hand other genes are turned off, thereby inhibiting cancer growth is accelerating, like a car without brakes. For an initial tumor to become a life-threatening cancer, tumor cells acquire different properties, such as to evade the immune system and recruit blood vessels. Ultimately originally benign cancer cells attain the dangerous potential to spread to other tissues after a period of tumor progression. The resulting metastasis presents a challenge for the therapy because these drugs need to reach any tumor cells. 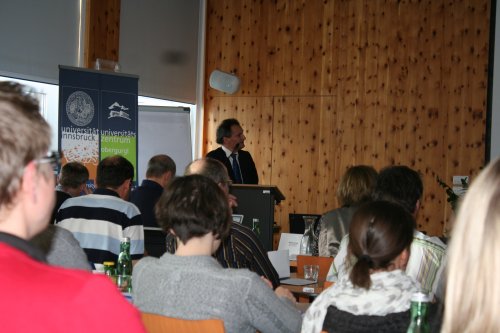 Prof. Greil (Salzburg) presents his recent data at the LBI-CR Annual Meeting in Obergurgl
Tumor progression is the subject of intense research, because scientists expect the discovery of relevant functions provides evidence for new therapies. Dr. Lukas Kenner, a pathologist at the LBI-CR in Vienna: "Tumors are complex and various tissues associated with the tumor cells in close contact. Pathologists know that long, but we often lack the experimental agent interactions between different cells in detail to investigate. "The goal is to develop scientific findings without delay into therapeutic measures. In the expert opinion of Dr. Moriggl: "Scientific evidence derived from suitable mouse models identifies previously unknown activitities of tumor cells and their accomplices, the stromal cells, improving our mechanistic understanding of how cancer may be treated. These new findings are very often exploited therapeutically and combined with known drugs, which makes new treatment options available upon preclinical testing. Thus, translational cancer research with genetically modified mouse models is an important element in the development of new therapeutic approaches." When this expertise is combined with clinical expertise cancer patients get faster access to treatments that are based on the latest scientific results.
News