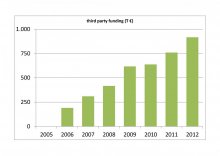 Researchers at the LBI-CR strive actively to supplement the financial support of the LBG and the Partners with funds from external sources. This provides leverage on the funds provided and by continuous peer review ensures internationally competitive research is performed within our institute. The director of the LBI-CR Richard Moriggl stresses: “External evaluation by international acknowledged researchers in the field of cancer research have consistently commended the LBI-CR on its outstanding scientific performance. The increasing amount of external funds is a clear sign of the high standard of our research.”

Since founding the LBI-CR in 2005 the absolute amount of funding has been increasing continuously and as of the end of 2012 3.8 M € were raised through programmes from the FWF, FP7, FFG and others. With the last meeting of the FWF Kuratorium in 2012 one stand alone grant, one new SFB and the extension of the existing SFB F28 were decided, which put the funds raised by LBI-CR researchers at 916.000 € for this year.

As of 2013 therefore the research team of R. Moriggl participates in two Special Research Programmes (SFB) funded by the FWF. They are the most prestigious funding opportunity by the Austrian Science Fund (FWF), which are aimed at creating local research networks according to international standards and favour building up the critical mass to tackle ambitious and multidisciplinary research goals.

SFB F28 entitled “Jak-Stat - Signalling from Basis to Disease” has been initiated in 2005 and has now been extended for its last funding period. Within this special research programme lead by Prof. Mathias Müller (Vetmeduni) scientists from six research teams jointly investigate how Jaks and Stats regulate immunity to infection, inflammation and cancer.