We have established and molecularly mapped the close interaction of a nuclear hormone receptor, namely the glucocorticoid receptor (GR), with hepatic STAT5 that is largely but not exclusively triggered by hepatic activation of JAK2 kinase. Disruption of the GR-JAK2-STAT5 signaling axis causes metabolic syndrome with aggressive liver cancer development in the case of GR/STAT5 deletion but surprisingly not in the case of JAK2 deletion. This finding attributed for the first time a tumor suppressor function to the STAT5-GR pathway downstream of growth hormone and glucocorticoid action for hepatocellular carcinoma development and progression. Similarly as we have performed with STAT5 deletion studies, we currently challenged the role of JAK2 for HCC formation. We found a metabolic switch in late livers resulting in a much less severe cancer phenotype on a GHtg background.

We have shown that JAK2, STAT5 and the GR are important regulators of growth, sexual dimorphism, metabolic and inflammatory control in human and rodent models of the development and progression of liver cancer. Our findings have been reported in 10 manuscripts since the original discovery of an essential hepatic GR-STAT5 interaction.

The RM lab is currently pioneering work into how lipolysis is regulated by GR-STAT5 action. Many cancer patients suffer from a progressive weight loss, called cachexia. Cancer cachexia is characterized by atrophy of adipose tissues and skeletal muscle, resulting in reduced quality of life, and a shortened survival time. Mobilization of adipose tissue in cancer patients is due to an increased lipolysis induced by tumor or host signaling molecules. Glucocorticoids (GC) have been hypothesized as potential mediators of cancer cachexia, as plasma levels of the prolipolytic steroid hormone are elevated in cachectic patients compared to those without cachexia. For this study we genetically introduce disturbances of the GR-JAK2-STAT5 signaling axis, since we have shown previously that it causes metabolic syndrome and peripheral lipolysis. Thus, we deleted the GR or STAT5 from fat tissues and generated a mouse model harboring an adipose tissue-specific deletion of the glucocorticoid receptor (GRAdipoq) to dissect the importance of GC-GR signaling in cancer-induced lipolysis. Initial ‘proof of principle’ analyses have displayed that mice with impaired GC-GR signaling in adipose tissue have a reduced capability to mobilize their adipose tissue stores upon a lipolytic challenge (See Figure). 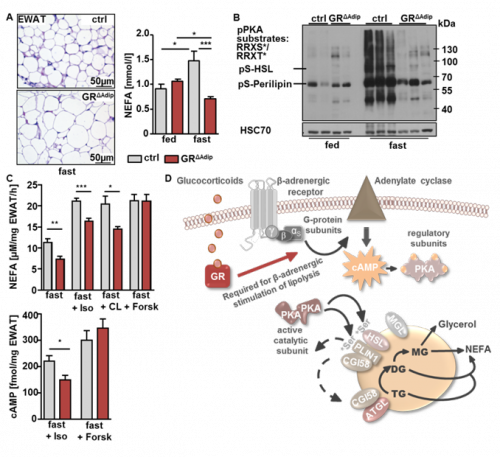 Glucocorticoid Receptor Signaling Drives Lipolysis: A H&E staining of epididymal white adipose tissue (EWAT) and plasma non-esterified fatty acids (NEFA) of fasted mice reveals reduced lipid mobilization in GR-deficient animals. B Western blot displaying decreased fasting-induced protein kinase A (PKA) activity in EWAT from fasted GR-deficient mice. Western blot against phosphorylated PKA substrates containing a RRX(S*/T*) epitope motif. C Ex vivo analysis of lipolysis and cAMP production in EWAT explants displaying that lipolysis is impaired in GR-deficient EWAT upon β-adrenergic receptor (βAR) activation but not in response to direct adenylate cyclase agonism. Explants were treated with isoproterenol (Iso, non-selective β-adrenergic agonist), CL-316,243 (CL, selective β3-adrenergic agonist) or forskolin (Forsk, adenylate cyclase agonist) to engage signaling steps distal to βAR activation. For A and C: Data are shown as the mean ±SEM; *P < 0.05; ** P < 0.01; *** P < 0.001. D Proposed model for GR-dependent regulation of the lipolytic cascade. Stimulation of βARs (innervation and catecholamines) results in activation of heterotrimeric G proteins and adenylate cyclase. These signaling events stimulate the production of cAMP, subsequent activation of PKA and the induction of lipolysis. PKA phosphorylates and activates HSL in addition to perilipin 1 (PLIN1), which associates with the cytoplasmic side of the lipid vacuoles. Under basal conditions, perilipin 1 sequesters the ATGL co-activator CGI58. PKA-mediated phosphorylation of perilipin 1 results in the release of CGI58, its subsequent association with and activation of ATGL. The GR is required for full lipolytic capacity under fasting conditions by by enhancing the signal transduction from βARs to adenylate cylases.