New mouse model for the analysis of oncogene co-operation 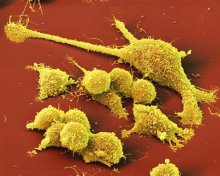 Cancer is caused by a series of mutations accumulating over time, not by a single change in the genetic information. It is the accumulation of oncogenic lesions in  a cell promoting malignant growth of a cell population, which result in a tumor. Scientists of the LBI-CR lead by Robert Eferl have now recreated these events in a mouse model. This research was performed in co-operation with TissueGnostics GMBH as well as the following academic institutions: Spanish National Cancer Research Centre, University of Veterinary Medicine, Medical University of Vienna, Research Institute of Molecular Pathology and Institute of Molecular Biotechnology. The results have recently been described in the prestigious journal "Nature Methods".

The LBI-CR focuses on developing new murine models of cancer. Robert Eferl conceived a method to generate stochastic activation of oncogenes in different variations in genetically modified mice, which is called "Multi-Hit". The model is based on the random expression of oncogene combinations ('hits') that are mediated by Cre in a given tissue. The initial report in "Nature Methods" describes the activation of ras, which is one of the most commonly activated oncogens in human tumors.

"Usually tumors harbour many genetic aberrations. We are interested to clarify, which changes confer a survival advantage onto certain cells and thus favour the development of tumors", said Eferl. The researchers investigated the impact of Ras activation in lung tumors. In particular they addressed which oncogenic signal tranduction pathways downstream of Ras conferred a growth advantage onto cells, including MAPK, RALGEF and PI3K. Only cells with co-operating hits are positively selected and give rise to tumors, which can be analysed. One of the results showed 85 percent of analysed tumors relied on all three signalling pathways downstream of Ras, while15 percent displayed only activation of a single pathway.

Further research on this novel model system to investigate co-operativity of oncogenic lesions is ongoing. Eferl: "After successfully implementing this model system we are interested to increase its complexity. Our next goal is to investigate the stochastic activation of oncogenes in the absence of specific tumor-suppressors. The co-operation of a hyper-activated oncogene and the ablation of tumor-suppressors lies at the root of tumor development. I am convinced we can generate interesting novel insights, which might even improve how targeted therapeutics are administered to cancer patients.

The summary of the original publication is available online:

A mouse model to identify cooperating signaling pathways in cancer