New paper out on epigenetic footprints in lymphoma

Lukas Kenner has contributed to a genome wide analysis of DNA methylation patterns in Anaplastic Large Cell Lymphomas, which was now published in Cell Reports. This research revealed that ALCL shows highly similar genome-wide DNA methylation patterns independent of their ALK status, one of the major oncogenes underlying the disease. The study confirmed that oncogenic transcription factors produce epigenetic footprints and many genes which were differentially methylated are implicated in major T cell functions.

This research was conducted as a collaboration within the Horizon2020 funded MSCA-ITN-2015-ETN ALKATRAS, in which the LBI-CR with Lukas Kenner participates. 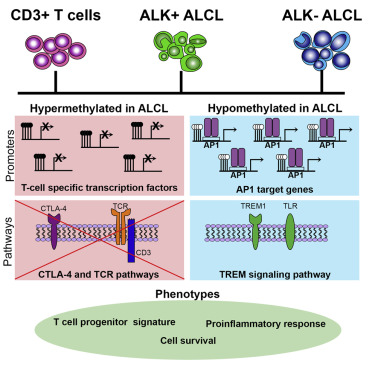