New review out on JAK-STAT signaling in cancer

A new review coauthored by several members of the LBI-CR focuses on JAK-STAT signaling in cancer: From cytokines to non-coding genome.
In the past decades, studies of the Janus kinases (JAKs) and signal transducers and activators of transcription (STATs) signaling have uncovered highly conserved programs linking cytokine signaling to the regulation of essential cellular mechanisms such as proliferation, invasion, survival, inflammation and immunity. Inhibitors of the JAK/STAT pathway are used for treatment of autoimmune diseases, such as rheumatoid arthritis or psoriasis. Aberrant JAK/STAT signaling has been identified to contribute to cancer progression and metastatic development. Targeting of JAK/STAT pathway is currently one of the most promising therapeutic strategies in prostate cancer (PCa), hematopoietic malignancies and sarcomas. Notably, newly identified regulators of JAK/STAT signaling, the non-coding RNAs transcripts and their role as important targets and potential clinical biomarkers are highlighted in this review. In addition to the established role of the JAK/STAT signaling pathway in traditional cytokine signaling the non-coding RNAs add yet another layer of hidden regulation and function. Understanding the crosstalk of non-coding RNA with JAK/STAT signaling in cancer is of critical importance and may result in better patient stratification not only in terms of prognosis but also in the context of therapy. The figure below is taken from the review and shows 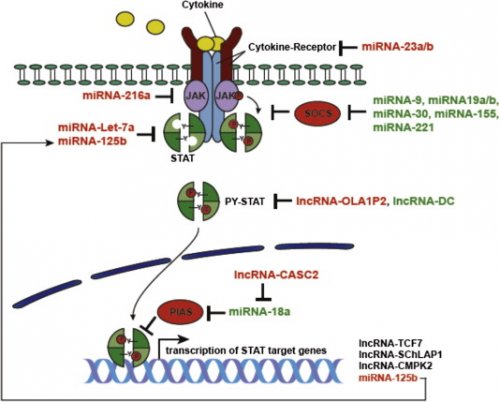