An important treatment strategy for prostate cancer patients is androgen depletion. After increased time (more then two years), however, most patients suffer from relapse due to development of androgen insensitivity. This is frequently caused by a mutated hormone-independent or amplified androgen receptor that occurs after 3-4 years of androgen ablation therapy. We took advantage of patient samples before and after androgen ablation therapy, (but therapy was maximally performed for two to twelve months) where we investigated the role of persistent Jak/Stat activation in the prostate cancer tissue arrays before and after chemotherapy. In this study we use immunohistochemistry (IHC), which increases the sensitivity. Together with the new analysis method HistoQuestTM, a precise and quick quantification of protein expression levels from patient samples is possible. Quantitation revealed differential expression levels of total Stat3/Stat5 as well as activated P-Y-Stat3/P-Y-Stat5 and important downstream targets after chemotherapy, implicated in Jak-Stat activation. At the moment we are investigating the effects on essential cell cycle regulators using the above described methods or proteins involved in survival, growth or tissue invasion of prostate cancer cells. 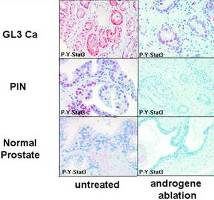 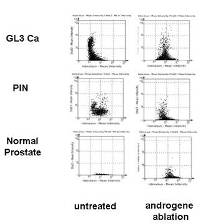 PTEN (phosphatase and tensin homolog deleted on chromosome 10) is a negative regulator of PI3K-Akt (phosphoinositol 3 kinase and protein kinase B). Its expression is inversely correlated with the stage of prostate carcinogenesis and it has been estimated that 70% of cases of PCa are associated with mono-allelic mutations in this gene. This is contradicted by recent whole genome sequencing data of 723 patients (www.icgc.org, March 2015) demonstrating PTEN mutations in only 4.7% of PCa patients. This would suggest that 95.3% of PCa patients have other PCa initiating events which are independent from mutationally inactivated PTEN. However, we found by reanalysis of two different datasets that complete loss of PTEN is highly frequent in metastases ranging from 50% to 54% as monitored by the Affymetrix single nucleotide polymorphism (SNP) 6.0 array system (Figure 3.3.3 A). When we analysed a cohort of 166 PCa patients using TMA we strikingly found that low STAT3 expression (p<0.007) and low p14ARF (p<0.000001) expression were associated with poor outcome. Moreover, combined loss of p14ARF and STAT3 expression in tumors of PCa patients predicted the worst outcome (p=0.000007, Figure 3.3.3 B)

Prostate tumors from the above mentioned Pten-deficient mouse models and also tumors derived from Pten/Stat3 and Pten/IL-6 double knock-out mice were used for proteomics analysis. From these data we expected to (1) establish the conditions for efficient and high-throughput proteomic screen of tumor specimens and to (2) identify Stat3- and/or IL-6-dependent candidates that are involved in aggressive progression of prostate cancer. After laser capture microdissection (LCM) of specific tumor areas and subsequent LC-MS/MS analysis, we retrieved significantly clustered proteome sets. Notably, the “internal control” protein Stat3 showed appropriate downregulation, proving to calibrate our method. Moreover, more than 80 proteins were found upregulated in Pten/Stat3 knockout-tumors, probably including novel markers for early detection of aggressive prostate cancer (see Figure below). We actually use this technology to elucidate and quantify the whole proteome of human prostate tumor samples and correlate the proteomic data retrospectively with tumor progression, treatment and patient survival data to discover new biomarkers which are important for diagnosis, prognosis and therapy. 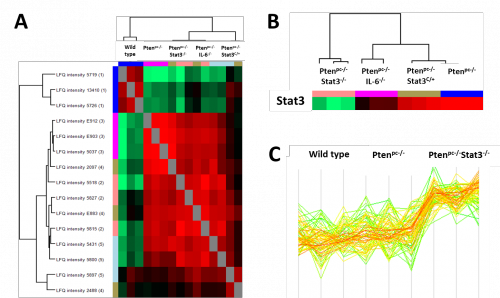 Starting with August 2013 this research is financially supported in part by the Austrian Science Fund (FWF) through stand-alone project "Genetic Analysis of IL-6 Signalpathway in Prostate carcinogenesis" (P26011).